Despite being armed with digital calipers and other tools for quality and inspection tasks, human workers simply cannot achieve the same levels of accuracy and consistency
provided by robots, making these tasks an ideal fit for automation. However, until relatively recently, automation has been beyond the budgetary constraints and in-house knowledge of most small-to-medium size businesses. The emergence of low-cost, easy-to-use collaborative industrial robot arms over the past decade, led by Universal Robots (UR), has changed all that, making advanced automation –including powerful quality control systems– available to companies of all sizes for the first time.

Collaborative robots from Universal Robots provide industry-proven repeatability down to 30 micron, making the cobots an ideal choice for
precision processes and metrology tasks.

Collaborative robots (or ‘cobots’) offer several advantages over traditional automation. Cobot-based automation is low cost, easy-to-use, flexible and safe
to operate around humans typically without fencing. Whereas traditional automation requires several months to deploy and expert robot programmers to install
and maintain, cobot-based systems offer all the benefits of automation without the usual cost and learning curve.
Additionally, while traditional automation tends to be inflexible, cobots and their peripherals can be redeployed on different tasks quickly and easily.

Manufacturers seeking to improve quality and throughput through automation are embracing cobot-based systems to perform a range of demanding quality control-related tasks, from optical detection of surface blemishes many times smaller than a human hair to metrology inspection steps. At the same time, automation specialist firms are using UR
cobots as a versatile, rugged, and reliable base on which to develop advanced quality control applications.

The Q-Span Workstation Kit developed by New Scale Robotics is a quality control measurement inspection system that builds on the capabilities of Universal
Robots’ UR3e cobot. The workstation has been certified as a UR+ Application Kit, which means it works seamlessly with the UR operating platform.
The system allows users to record all measured data to a PC for statistical analysis. The result is a mobile QC solution that improves small-part measurement
consistency and repeatability eliminate data entry errors and frees QC professionals to work on higher-value tasks.

The UR3e is IP54-rated and provides a pose repeatability of +/- 0.03 mm and a payload of 3 kg (6.6 lbs), which enables consistently accurate performance for both manufacturers and for OEMs seeking to create advanced industrial automation solutions on top of the UR cobot platform. Designed to automate digital caliper measurements, data
logging and small part handling, the Q-Span Workstation Kit can pick small parts, measure multiple features on each (with a measurement resolution of 2.5 µm (0.0001 inches)), and decide where to place the parts based on any measured dimension, including pass/fail and sorting into bins by dimension ranges. 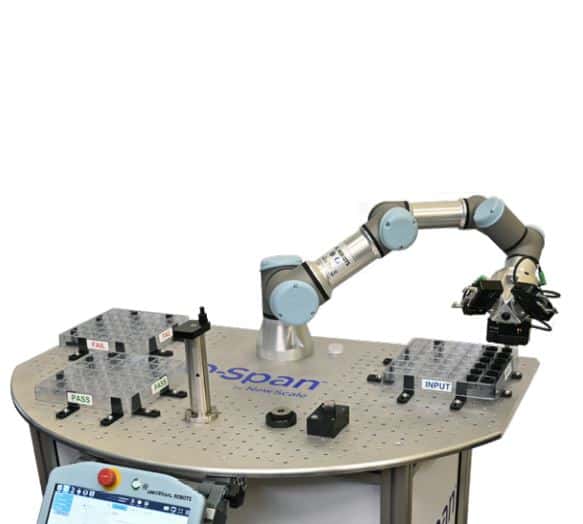 Universal Robots is “a really good fit” for New Scale’s technology development for numerous reasons, says Quinlivan. These include the open source technologies Universal Robot uses, its user-friendly teach pendant, company talent and resources, the scale of Universal Robots’ distribution network and the UR+ ecosystem, which provides manufacturers with access to certified application centered peripherals and application kits. Leveraging the UR3e’s ease of use and small form factor, the Q-Span Workstation Kit can be
installed quickly with minimal changes to existing facilities, equipment, and process flow. “In terms of setup time, it’s mostly the requirement of getting the robot onto your Q-Span workstation table and setting up the measurement through Universal Robot’s teach pendant. We’ve seen\ companies start part inspection as early as an hour or two after getting the equipment,” says Quinlivan.

New Scale Robotics, which won an RBR50 2020 award for innovation from Robotics Business Review, exploited the flexibility of the UR3e platform to introduce new, small part measurement capabilities within traditional pick and place operations. “We’ve extended ‘pick and place’ operations to ‘pick-measure-recordand-place.’ You pick a part, measure it in multiple dimensions, record those m n output bin,” Quinlivan explains. “Normally, workers would have to pick up a part, use their digital caliper to measure different features and then either write the number down or enter it into a system. With the Q-Span system, you can automate these tedious manual tasks.”

UR cobots are a “game-changer” in terms of being human-friendly and “breaking the barrier between human and machine,” says Rohit Khanna, president and CEO
at 3D Infotech, the California-based firm behind Universal Metrology Automation, a series of metrology solutions powered by Universal Robots’cobots.
Cost and expertise remain barriers to the adoption of traditional automation for QC tasks, especially among smaller companies, but the ease of use and flexibility of UR’s cobot platforms are so transformative, Khanna says, that its effects can be likened to that of Apple’s iPhone on the global cell phone market. “It’s not just the fact that UR cobots are collaborative but the fact that they come with a very plug-and-play style interface, which makes it really easy to teach the robot to do something, since there’s no programming involved. We don’t see other collaborative robots as being game-changers from that perspective,” says Khanna, noting that most of 3D Infotech’s customers come from the
aerospace, automotive, and healthcare sectors. 3D Infotech’s UR+ cerfitied Universal Metrology. Automation (UMA) is a powerful, noncontact 3D inspection system that allows users to easily teach measurement and inspection routines.

The system integrates the cobot’s kinematic chain, a turn-table and a 3D scanner, which allows it to function without the need to manually set photogrammetric targets.
UMA can also generate dimensional analysis reports, including CAD deviation color maps, geometric dimensioning and tolerance, statistical process control and multi-part variability. The system’s inspection and software tools can generate up to 1,300,000 measurements per second.

The UMA Desktop Robot, which is compatible with both UR3 CB3 and e-Series cobots, provides a rotary table repeatability and accuracy of < 0.25° and comes with
a rotary payload capacity of 36 kg (79.36 lbs). Meanwhile, the UMA Smart Station comes in two sizes – a UR5e-powered 2x4ft version and a larger, UR10epowered, 3x6ft version–and is a turnkey inspection solution that allows any user to run inspections with just a single click. 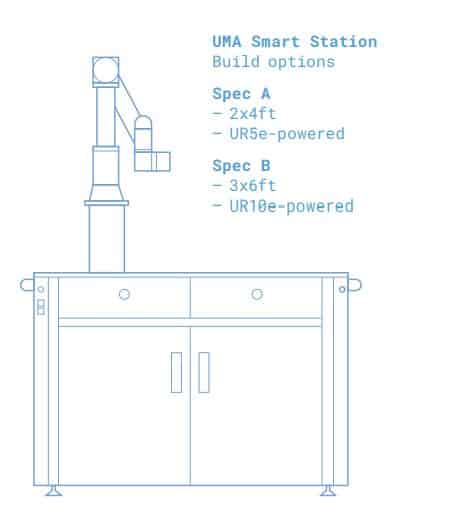 “3D Infotech’s UMA integrates the UR cobot’s kinematic chain to automatically set photogrammetric targets, supporting the generation of up to 1.3 million measurements per second.”

Building on the flexibility of UR cobots, the UMA Smart Station supports a wide variety of 3D scanners and 2D cameras. Finally, the UMA Smart Cell offers a range of
large-scale, cobot-powered configurations for robotic inspection tasks. The ability of the UR cobots to withstand long-term use in industrial environments is a major plus for both
manufacturers and OEMs, says Khanna. “Metrology happens in a production environment, so you need equipment that can withstand dust and environmental factors. UR has built that equipment and because their robots have been around for a while, there’s confidence that they will survive in rugged industrial environments.”

Compatible and adaptable. For any task

The UR cobots also provide a user-friendly platform for other companies to develop solutions, says Chris McMonigle, Territory Manager at LMI Technologies, which
produces the Gocator – an easy-to-use, 3D snapshot sensor compatible with Universal Robots’ entire cobot range. Gocator snapshot sensors allow manufacturers to easily
add smart, stereo 3D vision to their UR cobots, ensuring high-performance results in robot vision-guidance, quality control inspection, and automated assembly. The rugged, industrialized  sensors use stereo structured light scanners that generate high-density 3D data with a single scan trigger. Smart features include onboard data processing, built-in noncontact 3D measurement tools, and decision-making logic that can scan and inspect any part feature with stop/go motion at speeds up to 6 kHz.
Universal Robots’ cobots enable companies to bring the best of humans and robots together when it comes to performing quality tasks, explains McMonigle.  “Having to load and unload machines all day long, or sitting looking at parts all day to see if they conform can be mind-numbing tasks. Allowing somebody to do
what they’re good at as a human, which includes analytical and complex problem-solving skills, is a key thing to enable, rather than monotonous, boring tasks. Gocator performs these tasks without the operator needing to.” 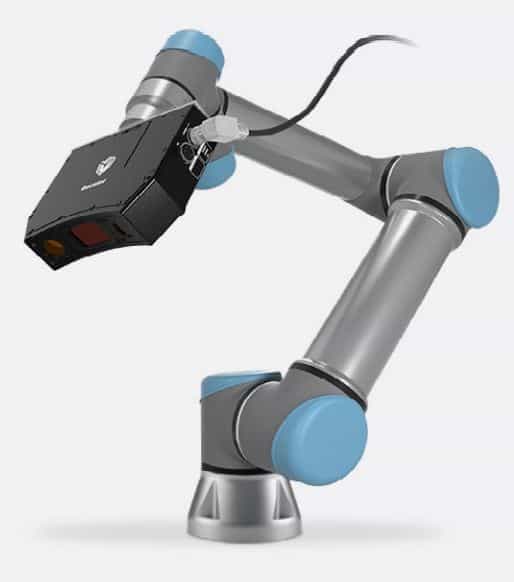 “Universal Robots has been a great partner. Ease of integration and ease of use are big factors for UR cobots. We see a huge market with Universal Robots because our technologies work in a similar manner.”

Designed to run and run.

Hexagon AB’s TEMPO is a powerful, off-the-shelf solution for automated part loading, queuing and unloading. Holds up to 100 kg of parts. Designed to increase the throughput of coordinate measuring machines (CMMs), TEMPO enables continuous automated measurement for hours and days at a time, freeing humans to work on other tasks. The system is configurable with 3-6 loading drawers, holding up to 100 kg (220.46 lbs) of parts. Quick to install and easily reconfigured with a minimal amount of training, TEMPO provides
automatic identification of out-of-tolerance parts. 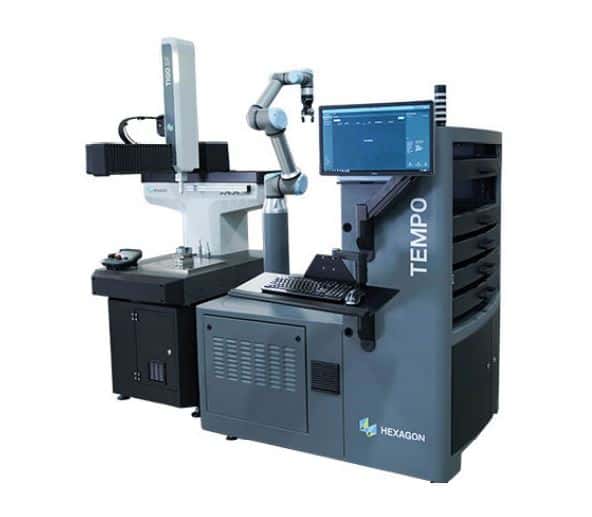 Universal Robots enables manufacturing companies of all sizes to reap the rewards of cobot-powered QC systems, from increased throughput and improved product quality
through to enhanced inspection and data analysis capabilities. And just as Universal Robots allows small companies to enjoy the benefits of automation, it inspires small OEMs to reach out to a wider audience through technology development and the UR+ ecosystem.

“UR has enabled my little company to think big and to use our core competencies in software development, motion control, and computer vision to expand out to a global audience, across many industries,” 3D Infotech’s Khanna concludes. 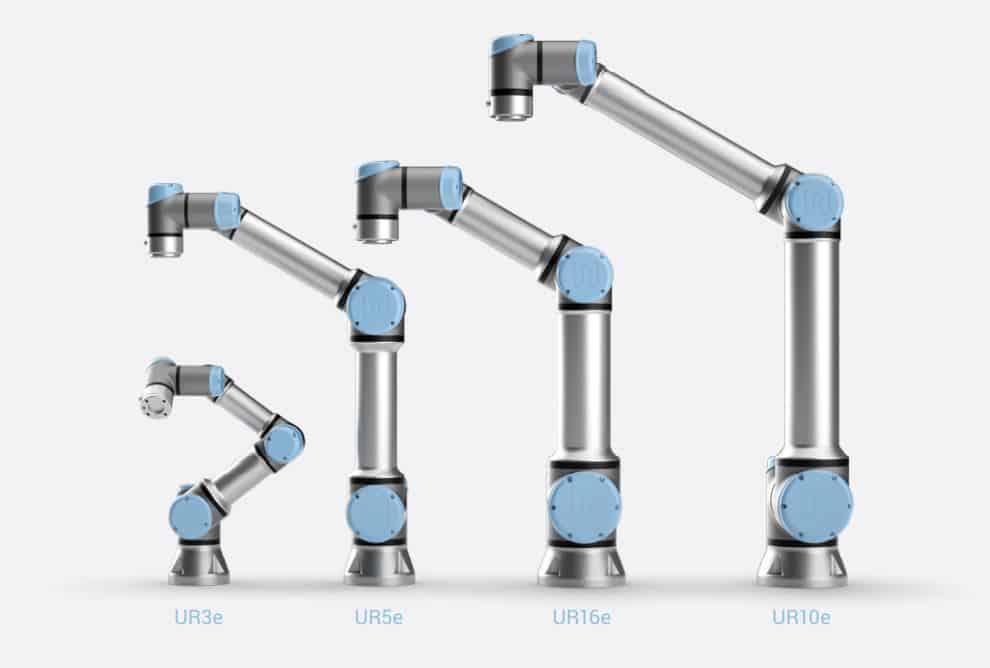