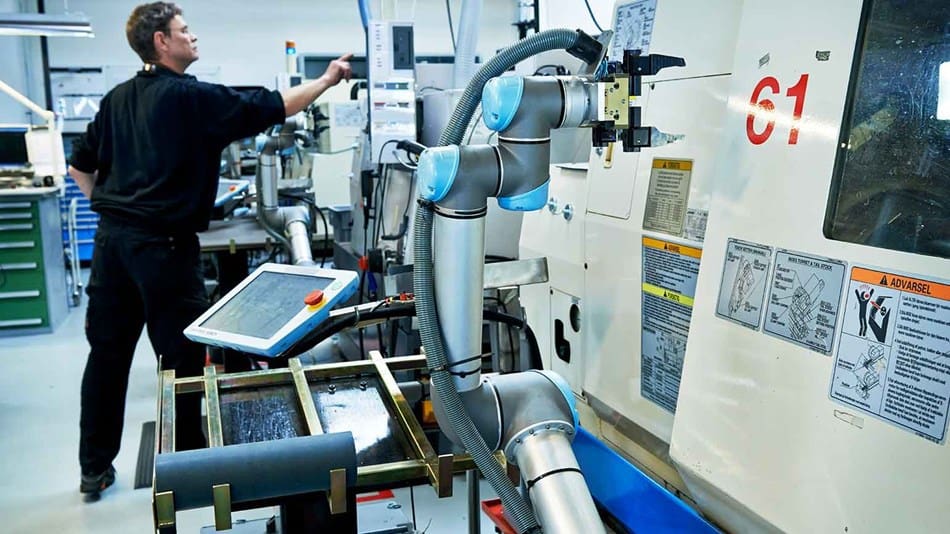 “When we were told we were going to use robots at Trelleborg, we were afraid that it would cost jobs. But it’s been quite the opposite. At the same time as we get more and more new machines and robots, we also get even more orders. The increase in business meant that 50 new employees were hired”

Following a major modernisation of the machinery at its Danish production site Trelleborg Sealing Solutions was faced with a serious space problem: The new CNC machines were taking up far more cubic metres than the old-fashioned turning machines. As a consequence, optimising processes by means of robotic arms was made difficult.

“We researched the market for suitable robots for years, but every single one we looked at required safety shielding. It made ​​them unattractive for us, since we are unable to extend the actual production area at our factory in Denmark,’ says Production Manager at Trelleborg Sealing Solutions in Denmark, Jesper Riis.

To be perfectly suited for Trelleborg’s requirements the robot also needed to be easily deployed and programmed to accommodate a production with orders ranging from a single unit to series of several million.

Trelleborg Sealing Solutions finally came upon the robot arms from Universal Robots. “Now we can produce at a much more competitive price than before. With flexible, lightweight robots from Universal Robots we have a useful tool to optimize everywhere in our production,” says Jesper Riis.

A thorough risk assessment revealed that they were in most cases allowed to run without safety shield, which solved the restricted space challenge. Today, 42 UR robots carry out machine tending on mainly CNC machines, enabling exactly the agile manufacturing demanded by Trelleborg as the robots are easily adjusted to new sizes.

Another tangible benefit of the UR robots is the fact that they allow one operator to keep a cell with eight CNC machines running at a time whereas before the maximum was three. As a result, Trelleborg has saved 1.5 employee per cell per shift.

Not only did the workers learn new tasks when introducing robots, they also started to think differently.