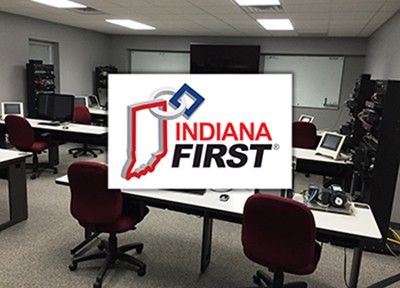 With the reboot of the show “Battle Bots”, it seems that the cool factor in robotics is re-emerging, especially in Indiana. If you haven’t read already, Allied Automation is a sponsor and competition judge of the Indiana FIRST robotics organization, specifically sponsoring the FRC team 5403 “Aluminosity”.

The Indiana FIRST organization helps children and teens get an early start in robotics, engineering and manufacturing technology. And best of all they get to create their own robots and put them to the test.

So we decided to bring that educational thrill in-house by having Indiana FIRST interns. Working alongside Andrew and Greg Dill, our two interns are getting a true, hands-on experience in project management, robotic design and implementation. Each summer we plan to host a handful of interns with the goal to build a complete robot by the end of the season.

This year, we are creating a FIRST robot that throws Frisbees. The robot will be used for training students, and FIRST will use it for program fundraising by traveling around to various companies and organizations throughout the state.